Governor Ifeanyi Okowa of Delta State has nothing to show for the N3.5trillion received from various sources in the past seven and half years, Deputy Senate President and Delta APC governorship candidate, Senator Ovie Omo-Agege,  has said.

Senator Omo-Agege made the remark while during his ward to ward campaign at Ukwuani local government area f the state. 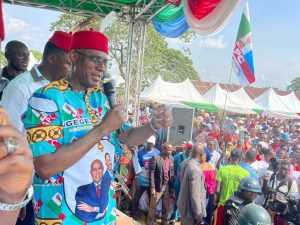 In a statement signed by Ima Niboro, Director, Communications and Media Strategy, Delta APC Campaign Council, Omo-Agege said that no state in the history of Nigeria has received the type of resources Delta received.

He however regreted that the state remains one of the least developed in the country.

Senator Omo-Agege warned the Speaker of the Delta State House of Assembly, and People’s Democratic Party, PDP, gubernatorial candidate, Sheriff Oborevwori, of the legal consequences of approving and authorizing loans to the governor that are later misappropriated. 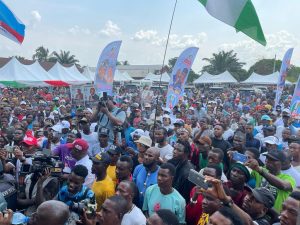 He said a critical assessment of infrastructure across Delta State ridicules the sobriquet of “road master” that Okowa once gave himself, as there is practically nothing on ground to account for the over 3.5 trillion receipts by his administration.

“Today, the people and ancestors of Ukuani have rejected Okowa. Okowa is a weak foundation who should not even bring a successor not to mention that unfortunate choice of his. We are here to make a solemn pledge to get rid of Okowa and everything that he represents at the polls. We are here to build a new Delta of true prosperity; a secure society that thrives on equitable planning and appropriation of resources.” 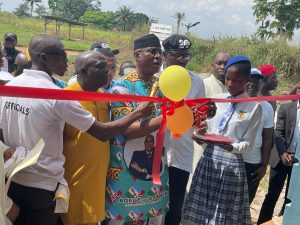 The projects included a 100 bed capacity hostel for boys and girls each, a two floor classroom block, an E-library and administrative building. 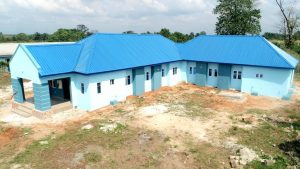 He further pledged the provision of 30,000 gallon water tank to take care of an increased pupil enrolment of the school, construction of the internal road network, with solar powered lights on roads and perimeters of the school.

Speaking during the commissioning ceremony, Senator Omo-Agege said the gesture was his contribution to improving the standard of education in Delta State because he believes the quality of education made available to students enhances their productivity and contribution to society.

“What we did is a clarion call to the State government which has failed to tackle the problems confronting the school. But this school laid the foundation of who I am today and this is my way of giving back to my alma mater.

During a courtesy visit, Senator Omo-Agege was conferred with the Chieftaincy title of Chiyeni Ugo 1, (who God has given the crown) of Umutu kingdom by HRH, Sunday Enwueliku Ossai, the Okpala-Uku of Umutu kingdom.

Senate President Ahmed Lawan has eventually won the battle for the ticket of All Progressives Congress (APC) senatorial candidate for...